Which monsters make an appearance in the Dnd movie?

Fans of the role-playing game will be pleased to have seen the many monsters and creatures that reared their heads in the movie trailer, which was shown at the San Diego Comic-Con back in July. While the cast are a bunch of great actors who seem to have a good group dynamic, the monsters might be the true stars of the show. Hugh Grant even said that he felt he’d been “upstaged” by a creature during filming, jokingly adding that he hoped the monsters would be cut out of the film. The many monsters in the movie trailer appeared for a fleeting moment each, so we’ve re-watched the trailer, paused it several times, to bring you our take-down on which monsters you’re going to meet if (when) you go to see the movie next March.

The first beast to be introduced in the trailer is the black dragon, with its bellowing roar. It flies over a hilltop of soldiers, spewing acid which dissolves the land and whoever happens to be in its flight path. Black dragons breathe acid to dissolve their enemies, dissolving them until they collapse into a pile of bones. A chaotic evil dragon with high intelligence, these creatures are known for their ability to cause destruction. Black dragons hide below the surface of water, ready to pounce on their enemy.

Known for their love of treasure and desire to amass huge amounts of gold, the red dragon is not only greedy but dangerous. Red dragons dwell in hot, volcanic realms, and are known for being ruthless tyrants. Mouth agape to reveal a huge set of teeth, the red dragon in the DnD movie trailer is ready to swallow its victim whole.

An apparent gold dragon is seen roaring in bard Edgin’s face, although there’s speculation that this creature is in fact a stone golem carved to look like a gold dragon.

Gold dragons are considered to be at the top of the dragonic race; they are wise, fair and committed to fighting evil. The party are thought to travel to Waterdeep, so this creature could in fact be the gold dragon who guards the city’s vault, Aurinax.

What if this beast is actually a stone golem? Powerful and determined creatures which follow their creator’s orders religiously, stone golems will pursue their victim whatever the cost. As you would imagine, these beings are difficult to fight as they are made from stone.

Very standard DnD, the mimic is a shape-shifting creature which takes on the form of an intimate object, but then becomes animate…..and ferocious.

Mimics often take the form of a treasure chest or book, and we see this in the Honor Among Thieves trailer; the treasure chest lid opens to reveal huge fangs and a huge tongue. Edgin, the bard, happens across this mimic while searching for a chest to loot. Once trapped, it’s immensely difficult to escape from the mimic’s clutches, which begins to dissolve your flesh with acid…. 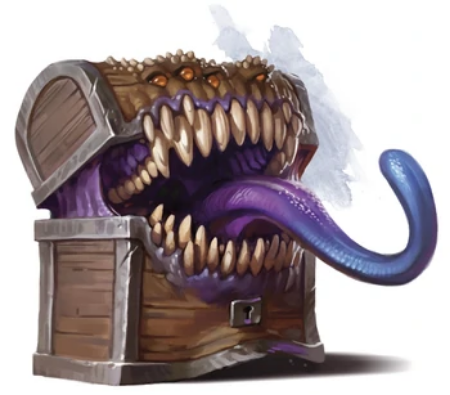 This beast is given more time in the trailer than some of the other monsters. It is seen in a face-off with Edgin, Chris Pine’s bard. Displacer beasts are elusive hunters which have the power to deceive their enemies, by creating an optical illusion. They can fool their victim into thinking that they are facing them, while they sneak up on them from behind. Resembling a black panther, this ferocious feline-like creature has six legs and two tentacles on its back, designed to grab, drag and thrash its victims.

It’s an innate magic which allows displacer beasts to disguise their true position - their magical ability allows them to bend light, and create the illusion. Displacer beasts are predators and killers…..They need no reason to kill, although they typically retreat if they are losing rather than fighting to the death.

This creature is a DnD staple. A giant wolf spider is, well, a big wolf spider. They can climb on many surfaces, they can climb upside down, even without making an ability check. They’re also able to detect the precise location of other creatures in the vicinity of their web. 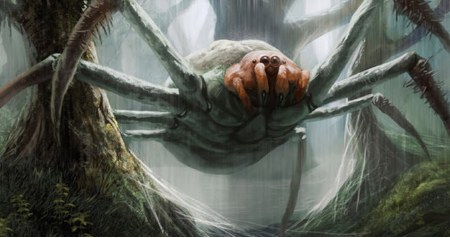 While battling against the displacer beast, the Bard dives head-first into a gelatinous cube. These 10-foot cubes of gelatinous, flesh-eating ooze will dissolve those who find themselves inside.  Gelatinous cubes are often transparent - they’re not easy to see, but easy to accidentally fall into. 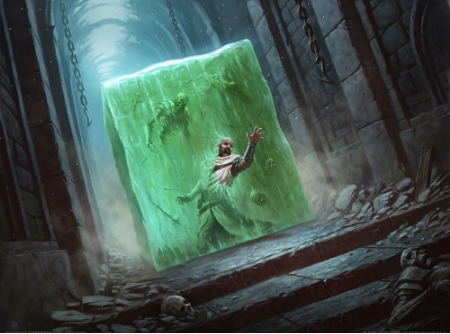 Sophia Lillis plays a Tiefling druid named Doric. Doric has the ability to shapeshift and travel through reflections. In the DnD movie trailer, it looks as though Doric transforms into the owlbear creature. However, the owlbear has met quite a bit of controversy in the DnD community….

Doric transforms into an owlbear using Wild Shape, destroying her enemies before she transforms back into a Tiefling form. The current DnD ‘official’ rulebook, Dungeons and Dragons 5e, published by Wizards of the Coast, states that Wild Shape allows Druids to transform into any beast they have previously encountered. The issue is that owlbears are not technically classified as beasts, but as ‘monstrosities’ - which means that technically, it would be impossible for Doric to use Wild Shape to turn into an owlbear. Many DnD fans have pointed out the movie’s liberal approach to the official DnD rules, much to their displeasure. There is also, of course, the ‘Rule of cool’ camp - that’s those of us who think that ‘cool’ actions can supersede official written rules.

Overall, it seems like the movie features a good selection of standard DnD monsters - dragons, displacer beasts, gelatinous cubes ... .All of these are very common, standard DnD fare. The owlbear might be less standard, and she may have irked some people. However, the rules of DnD have always been fluid, and a Dungeon Master or Game Master makes the final call. With that in mind, at Shop DnD we don’t have particular issues with the owlbear.

Translating the rules and dynamics of an interactive game into a purely visual medium, a movie, was never going to be straightforward. It’s not possible to replicate a real-life, interactive DnD campaign into a movie under two hours long, especially with a game with so many intricate and malleable rules. On balance, the Shop DnD team think that Honor among thieves has actually been pretty successful in adapting Dungeons and Dragons for the big screen - the movie creators seem to understand the essence of DnD.

Manage Cookie Consent
To provide the best experiences, we use technologies like cookies to store and/or access device information. Consenting to these technologies will allow us to process data such as browsing behavior or unique IDs on this site. Not consenting or withdrawing consent, may adversely affect certain features and functions.
Manage options Manage services Manage vendors Read more about these purposes
View preferences
{title} {title} {title}