Why Chris Pine is the perfect bard

Charming and handsome, we’re not surprised that Chris Pine was cast as whimsical bard Edgin. Edgin is also the film’s narrator, so we thought it would be fitting to begin our series on the Honor among thieves cast with Pine. The actor has spoken about the film in interviews with various magazines. Speaking with Entertainment Tonight, Pine describes the film as being “like Game of Thrones mixed with a little Princess Bride, just a smidge of Holy Grail; it’s somewhere in that ballpark. It’s a lot of fun.” He also says “there’s a bit of Goonies in there”. It sounds like the film is going to be somewhere between Lord of the Rings seriousness and Marvel self-aware tongue-in-cheek humour. The movie trailer, unveiled at the San Diego Comic Con in July, shows Pine swanning through the various settings, sometimes playing a lute. Here’s why Pine will make a great bard, and why we’re looking forward to seeing more of his lute playing.

It doesn’t come more stereotypically nerdy than Star Trek, and Chris Pine starred as no less than Captain Kirk - and he did a great job. Kirk is the captain who is more spontaneous, who leads the ship differently to other captains. He’s also a capable leader who gets along well with his crew. Pine was chosen to play Kirk in the 2009 Star Trek movie, which introduced the franchise to a younger audience. Many think that Chris Pine makes the film, and we have to agree.

Pine also showed himself to be a great comedic actor as Kirk, throwing in some great one liners, even if they didn’t impress his fellow crew members. The 2009 movie details Captain Kirk’s journey from an irresponsible young man who goes on to become a brilliant (yet still irresponsible) captain. Pine’s portrayal of Kirk is full of enthusiasm, when compared to the older version of the character portrayed by William Shatner. Shatner himself actually approved of Pine playing Kirk, calling the actor talented.

So, if Chris Pine can make a great Captain Kirk, then in terms of nerdy movie roles, he can take on anything. We think he’ll be a good fit for a whimsical, womanising bard, and we’re looking forward to seeing his incarnation of Edgin. We think he could be like the Dungeons and Dragons version of Captain Kirk; heroic and likeable, but also spontaneous and a risk-taker. The official synopsis hasn’t revealed much about the plot, but we’re sure that Pine’s character will be interesting to see.

Pine has played a leader many times, not just as Kirk but also as Prince Charming and Steve Trevor, or even in Guardians of the Galaxy, where his character Jack Frost becomes a sort-of leader. Although bards aren’t typically known as leaders, it seems like Edgin might be the natural choice to be the leader in the context of the Dnd movie. He is heard saying “I make plans” in the trailer (which the audience clearly hears in a jokey way, which is the overall vibe of the film). We think that Pine’s bard will make a good leader in the part-serious, part-comedy film that it looks like we’re getting.

The ‘I make plans’ quip tells us that Pine seems to genuinely understand his character class, which makes the Shop Dnd team think he’ll make a good leader of a less-than-razor-sharp group.

02 He has musical talent

We all know that bards use their music to make magic, so an actor who has some musical sensibilities is a definite plus in terms of this role. Chris Pine is actually a talented singer in real life, which is another reason why we think he’ll make a fantastic bard. He put his voice to good use in his role as a prince in the 2014 Disney film Into the Woods, a musical fantasy which was an adaptation of a 1896 Broadway musical of the same name. Pine showed off his musical theatre voice, especially in his rendition of Agony, a duet with Billy Magnussen. Many critics hailed Chris Pine as the standout of the movie, and it’s not hard to see why. Even Barbara Streisand asked him to collaborate with her on a duet in 2016, for her album Encore: Movie Partners Sing Broadway. Streisand said that it’s “(...) very difficult to find serious actors who can sing”. When Barbara Streisand says someone can sing, they can sing.  So impressive was Pine’s singing that people even compared him to Frank Sinatra, of whom Pine has said he’s long been a fan.

Oh, and it would be terribly remiss of us not to mention the time he serenaded a fan on live TV, on the Ellen Degeneres show. Yes, a full on serenade. If you need convincing any more that Chris Pine is the perfect casting for a bard, then we don’t know what else we can tell you. Back in 2014, Pine sang Sinatra’s “Summer Wind” to a starstruck fan who had been invited up on stage by Ellen. This is exactly the kind of charismatic, charming gesture we could imagine a bard making.

Pine’s musical flair isn’t just limited to his on-screen personas, though - he’s always had an affinity for music. Pine apparently loved singing as a kid, stating that he always loved Frank Sinatra and Prince. The Shop DnD team think that this is another reason why Pine will make a great bard; not only does he know how to act in a nerdy movie, he also has musical sensibilities. 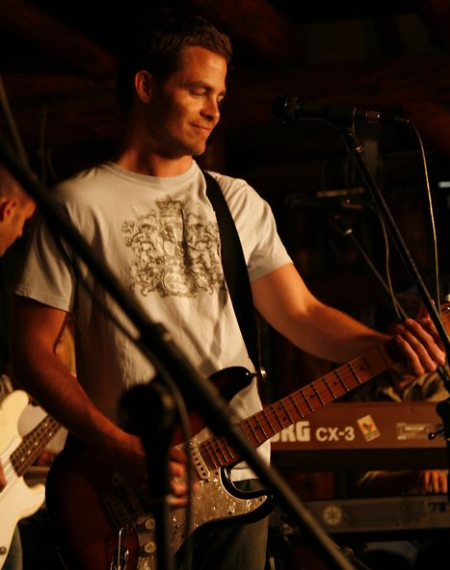 Taking a look at Chris Pine’s filmography, overall he’s known for playing confident, perhaps even arrogant, characters. For one, Captain Kirk is a very self-assured role, as is Steve Trevor in Wonder Woman. Pine’s roles have tended to involve him competing with other men in some way, whether as part of a love triangle in Z for Zachariah or as Captain Kirk in Star Trek. In Dungeons and Dragons, the dynamic between different people in the group are key, and so this aspect of Chris’ previous roles means he’s going to be a great Dnd party member. We can even see how well Pine gels with his fellow cast members in various interviews, such as the MTV News interview where the cast discuss their experiences with Dnd in real life. The cast members joke with one another, and seem to have a connection off-screen, which can only be good for their portrayal as a party on-screen.

Like his fellow cast members (bar Hugh Grant), Pine toyed with playing Dnd in real life. Dnd is often said to attract people who aren’t socially comfortable, or who feel like an outsider in some way. Surprising as it may sound, Pine has said that he was an ugly duckling and awkward teenager. He describes his younger self as a spotty, bespectacled and awkward guy. The actor says he still feels more comfortable around people who are “uncomfortable with themselves”. His personality and humility off-screen make him seem like an even better candidate for his role in the Dnd movie. Although bards are typically confident and self-assured, this often isn’t the case for the people who take on this role in their Dnd sessions.

One thing that will be interesting to see in the movie is the interaction between Edgin, Chris Pine’s bard, and Forge, Hugh Grant’s rogue. The overlap between bards and rogues in terms of their abilities has been discussed at length by many Dnd players. As we hinted above, we think that Pine truly ‘gets’ his bard character. If you’ve seen the trailer (which you most likely have if you’re reading this), you can’t have missed Edgin’s little hop towards the end. What more do we need to show that Pine is going to play a good bard? Hugh Grant’s cheshire cat grin in the trailer also hints that he’s going to make a good scheming rogue.

Both rogues and bards- in their basic forms -  lack spellcasting abilities. Both use stealth and deception to solve problems and get by in the Dnd landscape. In the movie trailer, we can see that Forge is in charge of a maze, which is home to the standard gelatinous cube, an ooze capable of engulfing creatures and dissolving them in acid.  Doric, a druid (Lillis) and the sorcerer (Justice Smith) jump into this cube, which is (as you might have guessed) a bad idea. However, since sorcerers are a versatile class and masters of magic, we have good reason to be hopeful for these characters’ fate.

The trailer and synopsis don’t give anything away about the race of sub-class of Pine or Grant’s bard and rogue characters respectively, so it remains to be seen what kind of magical abilities the film will give to them. Judging by his smirk in the trailer, we guess that Forge Fletcher will come up with machinations that Pine’s group will initially be unable to solve. We also think, due to the light-hearted and comic aspect of the film, that the Pine’s group will emerge as the winners. We just can’t imagine a sad ending….

Despite the lack of official information about the characters, we can say that bards usually aren’t the planners of the group. A bard is usually thought of as charismatic, squishy characters, yet Edgin is the planner in the movie. However, since none of the characters in the trailer are first class for Intelligence, and the movie is partly a comedy, it does seem fitting that the bard is the brains of the group.

All in all, as we’ve delved into Chris Pine’s off-screen character, alongside his acting and musical credentials, we’ve convinced ourselves (and hopefully you) that he’s perfect for his role as Edgin. We aren’t sure whether Pine can play the lute as well as he can sing, but we don’t think this is a major concern. With confidence and the ability to embody different characters on-screen, his humility and friendliness in real life, and his theatrical voice, we’re excited to see what spells Pine can cast in the Dnd movie.

Manage Cookie Consent
To provide the best experiences, we use technologies like cookies to store and/or access device information. Consenting to these technologies will allow us to process data such as browsing behavior or unique IDs on this site. Not consenting or withdrawing consent, may adversely affect certain features and functions.
Manage options Manage services Manage vendors Read more about these purposes
View preferences
{title} {title} {title}